<p>Ideally, you get along with your colleagues. You might not become best friends, but you like them enough that you can work well together and don’t mind being around each other. </p> <p>But as we know, life’s rarely ideal. And sometimes people just don’t like each other. </p> <p>While dreading the presence of a <a href="https://www.themuse.com/advice/how-to-deal-with-the-5-most-negative-types-of-coworkers">horrible co-worker</a> is bad enough, what’s just as bad (and sometimes worse) is when two of them hate each other and you’re stuck in the middle.</p> <p>The most important piece of advice I can give you when this happens is this: <em>Stay out of it.</em> Resist the temptation to get involved in their interpersonal issues. It’s rarely productive. If Jane’s telling you how much she hates Paul, and you sit there nodding in agreement—or worse, add in why <em>you</em> hate Paul, too—you’re just fueling the fire and increasing the levels of <a href="https://www.themuse.com/advice/4-ways-to-stay-sane-in-a-toxic-office">toxicity</a>.</p> <p>It’ll quickly become the only thing you and Jane ever talk about (how fun and cozy!). <br/> Plus, if she ever decides to call Paul out, you risk her telling him that you feel the same way. And just like that, the pettiness of middle school has come back to haunt you. </p> <p>Instead of inserting yourself, try one of these three suggestions.</p> <p><br/></p> <h2>1. Change the Topic</h2> <p>You could decide to completely stop talking to Jane and Paul other than when you’re in meetings together or emailing about work. It might feel awkward, but it’s a fairly effective, low-confrontation way to <a href="https://www.themuse.com/advice/8-noncondescending-ways-to-respond-to-a-coworker-who-wont-stop-gossiping">stay free of the drama</a>. </p> <p>But what if you like Jane and Paul? What if you want to remain friendly with them?</p> <p>In this case, when one of them starts talking badly about the other, distract them and steer them toward another conversation topic. Sure, it’s a bit of a cop-out, but you’d be surprised how effective it can be in deterring them from venting to you further. For example:</p> <p><strong>Paul:</strong> <em>Ugh. Did you hear the dumb thing Jane said in all hands today?</em></p> <p><strong>You:</strong> <em>Must’ve missed it. But look at this video of my cat knocking things off the table. I can’t stop laughing every time I look at it.</em> </p> <p>Or</p> <p><strong>You:</strong> <em>Hmm, no. However, I did hear the news that they’re considering giving us bonuses this year! What do you think the likelihood is that’ll actually happen?</em></p> <p>Hopefully, Paul takes the bait and lets you lead him into a different conversation. And, perhaps, he’ll notice the pattern of you changing the topic every time he brings up Jane and <em>he’ll stop bringing up Jane.</em> </p> <p><br/></p> <h2>2. Ask Them to Leave You Out of It</h2> <p>Sure, changing the subject works. But I’m a big fan of clear, direct communication. What better way to make it obvious to someone what you want and need in life than to <em>tell them</em>? If Jane bad-mouths Paul, you have every right to state that you want to remain neutral—again, this isn’t your battle to fight. Pull her aside and be direct in <a href="https://www.themuse.com/advice/3-polite-phrase-to-shutdown-uncomfortable-conversations-at-work">shutting the conversation down</a>:</p> <p><em>Hey Jane. I’m sorry you’ve been having a hard time with Paul. It must be difficult to be at work with him every day. But it’d be best for me and our friendship if you didn’t talk to me about it. I’d rather not get pulled into the middle.</em> </p> <p>You can ask someone not to do something while still being polite and empathetic. This doesn’t make you an asshole. It means you’re standing in your power and doing what’s best for you. If this ends up making them dislike or distrust <em>you</em> (which is, unfortunately, a possibility), at least you’re out of range of getting in trouble with the higher-ups when their fighting comes to a head. </p> <p>If you want to help her make the situation better—and she seems open to feedback or advice—you can tack on the following:</p> <p><em>If you think the tension between you two is impacting your happiness here, then I really encourage you to reach out to [insert name of boss or HR representative] or try [suggestion for diffusing the tension].</em></p> <p><br/></p> <h2>3. Seek Help From Your Boss or HR</h2> <p>Let’s get one thing straight: It is <em>not</em> your responsibility to fix this issue. Don’t try to be a mediator. That’s typically a recipe for disaster. If the situation doesn’t seem to be getting better, and especially if it’s affecting your work or theirs, it might be time for you to remove yourself completely for now and to defer to those who are (hopefully) better equipped to address it. </p> <p>You might be afraid of coming off as a <a href="https://www.themuse.com/advice/how-to-tattle-at-work-without-being-a-tattletale">tattletale</a> or gossip, but it’s absolutely possible to handle this in a neutral, professional way. Try saying something like this in your next one-on-one with your boss:</p> <p><em>I’ve noticed that there seem to be some major tensions between Paul and Jane. I’m not sure what’s going on there. I don’t want to cause a fuss, but wanted to bring it to your attention, as I think it’s beginning to impact [what their fighting is impacting].</em> </p> <p>You don’t have to say much more than that, though you may also want to mention that you want to remain anonymous. (This should be a given, but you don’t want to make that assumption and risk being outed.) Your boss or HR rep can take it from there and figure out how to move forward. The bottom line is, if it gets really bad, step away completely and ask for help. </p> <p><br/></p> <p>A feud between co-workers is never fun. Whether you like both of them, one of them, or none of them, the most important thing to remember is to not get involved. Because then it becomes your problem, too. </p> <p>(And, hey—if you’re the Paul or Jane in this situation, take a step back and think about how you might be <a href="https://www.themuse.com/advice/5-times-you-end-up-being-that-super-annoying-coworker-without-meaning-to">affecting others in the office</a>. Just saying.) </p> <p><br/></p>

JOIN THE COMPANY THAT REVOLUTIONIZED THE FLOORING BUSINESS.

Floor & Decor is like no other flooring company. Founded in 2000 in Atlanta, we have quickly become one of the country’s leading flooring retailers, with dozens of stores nationwide – and more to come. A strong entrepreneurial spirit flows through our young company.

The remarkable success we have enjoyed could not have happened without the time, talent, and teamwork of our extremely dedicated associates. Working with equal amounts of passion and grit, we’ve become the “category killer of flooring” by revolutionizing the way people buy flooring. Our customers enjoy the largest in-stock selection of tile, wood, stone, and flooring accessories at prices no one can beat.

To continue our amazing growth, Floor & Decor is actively seeking gifted people with a solid work ethic and a real passion for helping others. Are you ready to make a difference at a truly groundbreaking company? 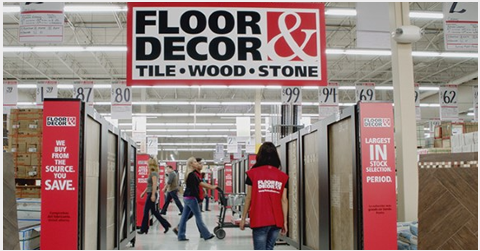 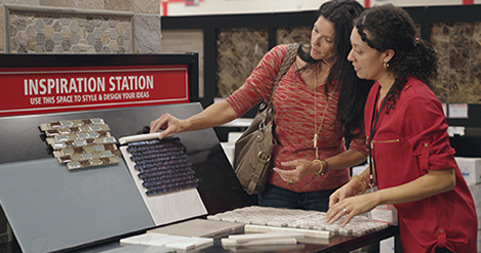 WHY WORK FOR US?

Floor & Decor is like no other flooring company. Founded in 2000 in Atlanta, we have quickly become one of the country’s leading flooring retailers, with dozens of stores nationwide – and more to come. A strong entrepreneurial spirit flows through our young company. The remarkable success we have enjoyed could not have happened without the time, talent, and teamwork of our extremely dedicated associates. Working with equal amounts of passion and grit, we’ve become the “category killer of flooring” by revolutionizing the way people buy flooring. Our customers enjoy the largest in-stock selection of tile, wood, stone, and flooring accessories at prices no one can beat.

NOT READY TO APPLY?

Joining our Talent Network will enhance your job search and application process. Whether you choose to apply or just leave your information, we look forward to staying connected with you.

We use cookies to personalize content such as job recommendations, and to analyse our traffic. You consent to our cookies if you click "I Accept". If you click on "I Do Not Accept", then we will not use cookies but you may have a deteriorated user experience. You can change your settings by clicking on the Settings link on the top right of the device.